For the past several years, the emerging offshore wind industry has been busy securing state and federal permits, convincing state governments, fishermen, environmentalists and coastal residents of the advantages of wind power and raising capital to finance offshore development.

Now attention can turn to creating a workforce that is skilled, trained and ready to jump in when this promising renewable energy sector takes off.

“It was difficult to put money into training in the early stages because there wasn’t the clarity that the market for wind power existed as it does today,” said Liz Burdock, president and CEO of the non-profit Business Network for Offshore Wind. “You didn’t want to put money into training and then have no jobs. But now, with all the changes that are happening, we’ll be facing (the need for) worker training in the next 12-18 months” as multiple commercial projects move forward.

While the offshore wind industry is well established in Europe with an experienced and seasoned workforce, it is just revving up in the U.S., with scant public knowledge about the possibilities of wind-powered electricity and the job opportunities it can offer.

The U.S. Department of Energy estimates that 43,000 new jobs will be created in the offshore wind market by 2030, while the Labor Department predicts that wind turbine technicians will be the fastest growing job in the U.S. in the coming decades.

“There is enormous opportunity, especially off the East Coast, for wind. I am very bullish,” said former Interior Secretary Ryan Zinke. “Market excitement is moving towards offshore wind. I haven’t seen this kind of enthusiasm from industry since the Bakken shale boom” when oil was discovered in North Dakota in 2006.

There is currently only one offshore wind farm in the U.S. — five turbines off the coast of Block Island, R.I., which began operating in 2016 — but there are 15 active commercial leases for new projects, mostly along the East Coast, where wind is strong and reliable.

A wind farm’s turbines stand about 600 feet high, with blades longer than the wing span of a 747 airplane, and they require precise fabrication and assembly from highly skilled workers.

Over the 25-year lifespan of a wind farm, specialized talent will be needed in all three phases of development: planning, construction and operation and maintenance. This includes engineers, site managers, longshoremen, port service workers, shipyard workers, water transportation workers and others.

There’s already a shortage of workers in many of these skilled trades along the East Coast, and since the industry essentially is non-existent here, there are currently no professional offshore wind technicians to draw on. A study by McKinsey & Co. in April said there is significant concern that there will be a lack of trained personnel to install and maintain the energy capacity expected from the current lease schedule.

In addition, even if current workers possess skills in the basic trades needed, they will require additional, specialized training for the offshore environment, which brings a unique set of dangers and demands.

Among the water transportation workers that will be needed are mariners to operate vessels that will bring construction and maintenance crews and turbine components from port to offshore work sites, pilot vessels that lay cables and perform surveying and monitoring duties, and operators of guard ships, tugs and barges.

In its 2018 Offshore Wind Workforce Assessment, Massachusetts concluded that short-term demand for maritime workers will likely outstrip the state’s existing supply of these workers “who would need to be incentivised to leave established industries such as commercial fishing.”

“There will be a deficiency in these jobs, so there’s a need to start training now,” said Paul Vigeant, executive director of the New Bedford (Mass.) Wind Energy Center.

The Port of New Bedford is investing more than $200 million to dredge channels and berths, and repair and enlarge maritime terminals to accommodate the needs of the emerging offshore wind industry, becoming the first port in North America specifically built to support staging and deployment of offshore wind components. A new offshore wind training facility on the waterfront is also planned.

“Given the shortage in these trades, the unions are gearing up and schools are developing technical training programs,” Vigeant said. “People are paying attention because without training, we will have a shortfall.”

Massachusetts is committing to multiple offshore wind projects in the coming years, with the first being the 800-MW Vineyard Wind project which will stage out of New Bedford. In May, the state announced $721,500 in grants to six academic institutions, including Massachusetts Maritime Academy, to establish offshore wind training and development programs.

New York, for example, has committed $15 million to train the local workforce and buildout port infrastructure. The state is also creating an advisory council on offshore workforce development and a $20 million offshore wind training institute on Long Island.

Universities and colleges on the East Coast are creating offshore wind degrees, certificates or course programs, often with the guidance of European experts, mostly from Denmark and the U.K.

Congress also acted in June, when a group of East Coast lawmakers introduced the “Offshore Wind Jobs and Opportunity Act,” that would provide up to $25 million in federal grants to help colleges, universities, unions and non-profits educate “a new generation of offshore wind workers.”

Offshore wind training programs for maritime workers can benefit from the experience of the U.S. offshore oil and gas industry in the Gulf. People and equipment from the Gulf were used in the Block Island project.

All global offshore wind developers have agreed to follow safety and technical training standards set by the Global Wind Organization (GWO), a non-profit body founded by leading wind turbine manufacturers and operators. Anyone who works in U.S. offshore wind, no matter the job, will have to pass a GWO basic safety training standard course.

“No one will hire you to work at sea if you don’t pass the five GWO basic safety courses,” in first aid, manual handling, fire awareness, working at heights and sea survival, said Vigeant of the Wind Energy Center. “It’s not a law, but a matter of risk mitigation and self-protection” for developers.

Until GMO certificate courses are widely available and more offshore wind vessels are built here, offshore wind companies will send employees to work on sister vessels in Europe under consultancy agreements, said Josh Diedrich, director of business development at WindServe Marine, a division of the Reinauer Group that provides support services to offshore wind projects along the East Coast.

If fishermen are recruited to work on CTVs as they have been in the U.K., they will need to learn a CTV’s waterjet propulsion system. They will also need to get used to intentionally steering into something at sea when they “gently kiss” a turbine in order to offload passengers, said Ben Colman, naval architect and director of Diverse Marine Ltd. on the Isle of Wight in the U.K.

Taking advice and acting on lessons learned from Europe’s wind industry can cut 10-15 years off the U.S. industry’s learning curve, said Colman. “They should use the European experience as much as they can,” he added. “Most European operators would be happy to help. We learned the hard way.” 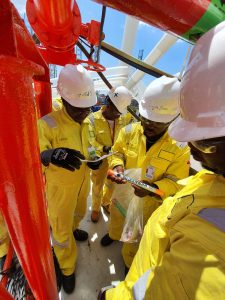